For the love of French baking 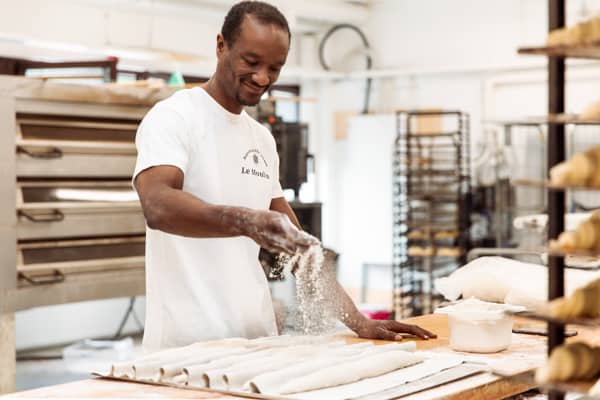 Maxime Kellia from France fulfilled his long-standing dream of having his own bakery and café. The entrepreneur is happy to be able to employ other people as well.

Croissant, pain au chocolat, baguette… The display case at the Le Grenier bakery and café shop situated in Meilahti is full of delicious looking pastries and bread, the taste of which takes you straight to France. It is an autumn morning in Helsinki, and some customers are leaving the premises with fresh baguettes under their arms.

The café, which opened in 2020, is owned by Maxime Kellia, a baker from Paris, and his Finnish wife, Minna Pesu. Kellia, who has lived in Finland for over ten years, considered the idea of setting up a bakery and bakery and café shop for a long time.

“I wanted to see how my idea of a French-style local bread shop would fair in Finland. In France, bread is bought fresh from a local bakery down the street, and this is what I wanted to bring to Helsinki,” says Maxime Kellia. 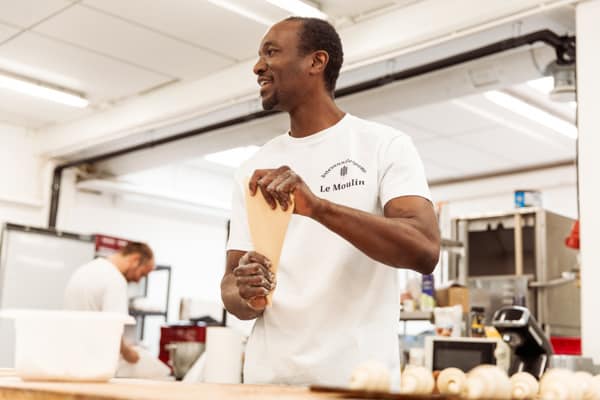 The Parisian baker takes pride in offering high-quality products made in the traditional French manner as close to the customers as possible. No additives are used, and all the products are baked carefully by hand.

“Customers have welcomed us very warmly and with great enthusiasm. There was clearly demand in Helsinki for fresh bread and pastries that the citizens could pick up nearby. This can also be seen in the current popularity of local food and artisan products,” says Maxime Kellia.

Kellia initially baked the products on-site at the Le Grenier café, but more space was soon needed. The production is now focused in the Le Moulin bakery located in Herttoniemi, and the enterprising couple has already opened two new cafés. Café de la Gare Huopalahti and Café de la Librairie offer French delicacies and ambience next to the Huopalahti station and on Aleksanterinkatu, respectively.

Working according to his own vision and seeing the results of the work is what makes Maxime Kellia happy and motivates him as an entrepreneur.

“As an entrepreneur, I only work for myself – and the customers, of course. I particularly like meeting customers at the shop and sharing with them my enthusiasm and knowledge of bread and baking in general. That is my greatest source of happiness and motivation.”

“My wife and I are also happy to be able to employ other people through our company,” says Kellia.

Bureaucracy can be surprising 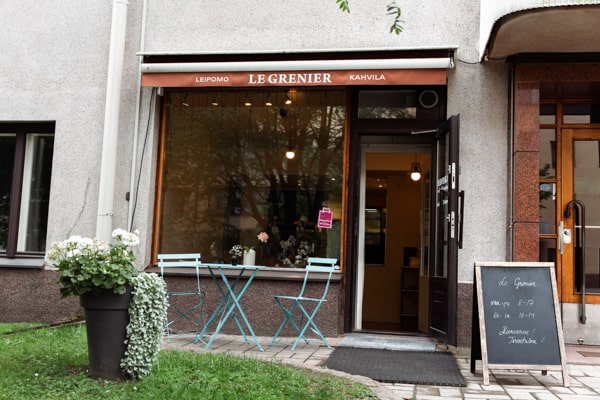 The entrepreneur couple has not taken advantage of the services offered to new entrepreneurs, but they have received help from friends and customers.

“Friends helped with the renovation of the café premises, for example. The customers helped us with the website, and we got good tips and contacts. The support of a professional accounting firm has also been important. Our success is based on teamwork and collaboration,” says Maxime Kellia.

Administrative bureaucracy has surprised Kellia, for better and for worse. Kellia’s native language is French, but he also speaks English and a little Finnish. He feels that without a good knowledge of Finnish, it is difficult to deal with different authorities.

“It was not a surprise as such that the taxes in Finland are higher than in France, for example. Then again, we have also received very flexible and proactive advice from the authorities.”

“As for Finnish taxes, some entrepreneurs are surprised positively, others negatively. The opinions of different authorities on the same matter may differ because the authorities are governed by different legislation.”

Maxime Kellia says that people with an immigrant background interested in entrepreneurship should be prepared for surprises and that, depending on the business, it may take time to obtain the necessary permits.

“Find a partner who speaks Finnish well and knows where to ask for advice and support. Be prepared to work long hours, initially even without pay. The most important thing is that your heart is in what you do: it helps you keep going.”