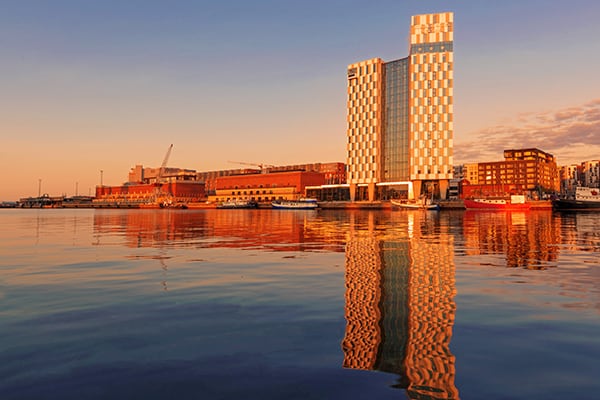 Helsinki is one of the leading cities in the fight against climate change, with the goal of becoming carbon neutral by 2035. The heating system is at the heart of the battle, as its emissions account for more than half of Helsinki’s total emissions. The City of Helsinki arranged the year-long international Helsinki Energy Challenge to find future-proof solutions to heat the city during decades to come. The results of the competition have been announced on 16 March 2021.

An international jury has selected four winners from the ten finalists in the Helsinki Energy Challenge.

HIVE, a flexible plan, based on proven technologies and solutions, such as seawater heat pumps, electrical boilers, solar thermal fields and demand side management measures; the plan is capable of integrating new technologies if and when these emerge.

Beyond fossils, an energy transition model based on open and technology neutral clean heating auctions, paving up the path to carbon neutral Helsinki in a flexible and innovation enabling way.

Helsinki’s Hot Heart, a flexible system made of 10 floating reservoirs filled with 10 million cubic metres of hot seawater that can receive different energy sources as input. Four of the cylindrical tanks that make up Helsinki’s Hot Heart would be enclosed with inflatable roof structures to create a new leisure attraction.

“The energy sector is going through a remarkable revolution and we are faced with a systemic change on many different levels. We did not expect the competition to yield one solution, which solves the whole puzzle. Instead, we now have in our hands a very wide range of solutions, which will help not only Helsinki, but also other sustainable and innovative cities looking for heating solutions. At the same time, the one million euro Challenge is one way for Helsinki to participate beyond its own relative size in solving the global climate issue. Helsinki stands out as an internationally networked pioneer in the local implementation of global responsibility. Helsinki is committed to sharing the solutions of the competition and learning with all cities”, says Helsinki Mayor Jan Vapaavuori.

Energy revolution puts an emphasis on co-operation between different stakeholders

The Helsinki Energy Challenge showed that emissions-neutral heating can be reached through many different kinds of solutions.

The finalist solutions emphasised that the heating system of the future must be resilient and acknowledge upcoming technologies, but that we should not stop to wait for them. The optimization of energy production and consumption is another priority in the future heating system. Many of the Helsinki Energy Challenge proposals included also steps towards a two-way district heating network and models with several heat producers.

The competition showed that the heating system of the future is made up of several partial solutions and actors, which have been optimised to work together. A system of this kind challenges the traditional approach. In the future model, there are many actors and the integration of interests requires deliberation of the thoughts and operating models.

“The Helsinki Energy Challenge made it clear that the heating challenge is not ultimately just a technological challenge. Some of the proposals took on the challenge by means of business models and other operating models, while trying to tackle the question of how the heating market should function in order for it to be the best possible for both the climate and the citizens. Here, too, the city can play a big role and strive to make its heating system as flexible as possible, so that we do not rule out technologies of the future or new players, but on the contrary, allow innovation and new entrants. The discussions towards this direction and concerning the next steps have already started”, says Mayor Vapaavuori.

The competition generated fresh views and new kinds of collaboration

Through the Helsinki Energy Challenge, Helsinki was offered as a testbed where future-proof heating solutions can be created. The competition’s international popularity surprised the organisers.

”We addressed a significant question with the challenge competition model and it generated thinking and discussions, both within the city and outside it, which may not have occurred otherwise. That is an extremely important achievement as such. The competition inspired multidisciplinary teams from all around the world to participate. Several teams have carried on with the collaborations and this will likely multiply the benefits of the competition. The discussions in the different phases of the competition showed that there was a demand for our approach. The energy revolution and the fight against climate change require innovative and exceptional ways of finding solutions”, says Project Director of the Helsinki Energy Challenge Laura Uuttu-Deschryvere.

The competition attracted 252 proposals from 35 countries. All ten finalist proposals can be downloaded from the Helsinki Energy Challenge website. A database will also be completed on the site in the coming weeks, where all the proposals of the first stage of the competition that have given permission to share their work will be distributed.

In addition to the four award winning proposals, the City of Helsinki grants a recognition award to the team “CHP Consumers to Heat Producers” for an eye-opening description of the diversity of the heating challenge and relevant stakeholders.

The City of Helsinki encourages young people to become entrepreneurs

This summer, the City of Helsinki was also involved in boosting youth entrepreneurship by supporting the summer entrepreneurship programs of the Economy and Youth TAT and the 4H associations of the Capital Region (Pks4H). A total of 45 15–29-year-olds who were...

Startup, are you interested in Japan markets? On November 10, your startup could be pitching online at Fukuoka City x MoU Global Startup Pitch Event. Fukuoka City would like to invite startups from Helsinki Area to pitch at the event. Prominent investors will be...