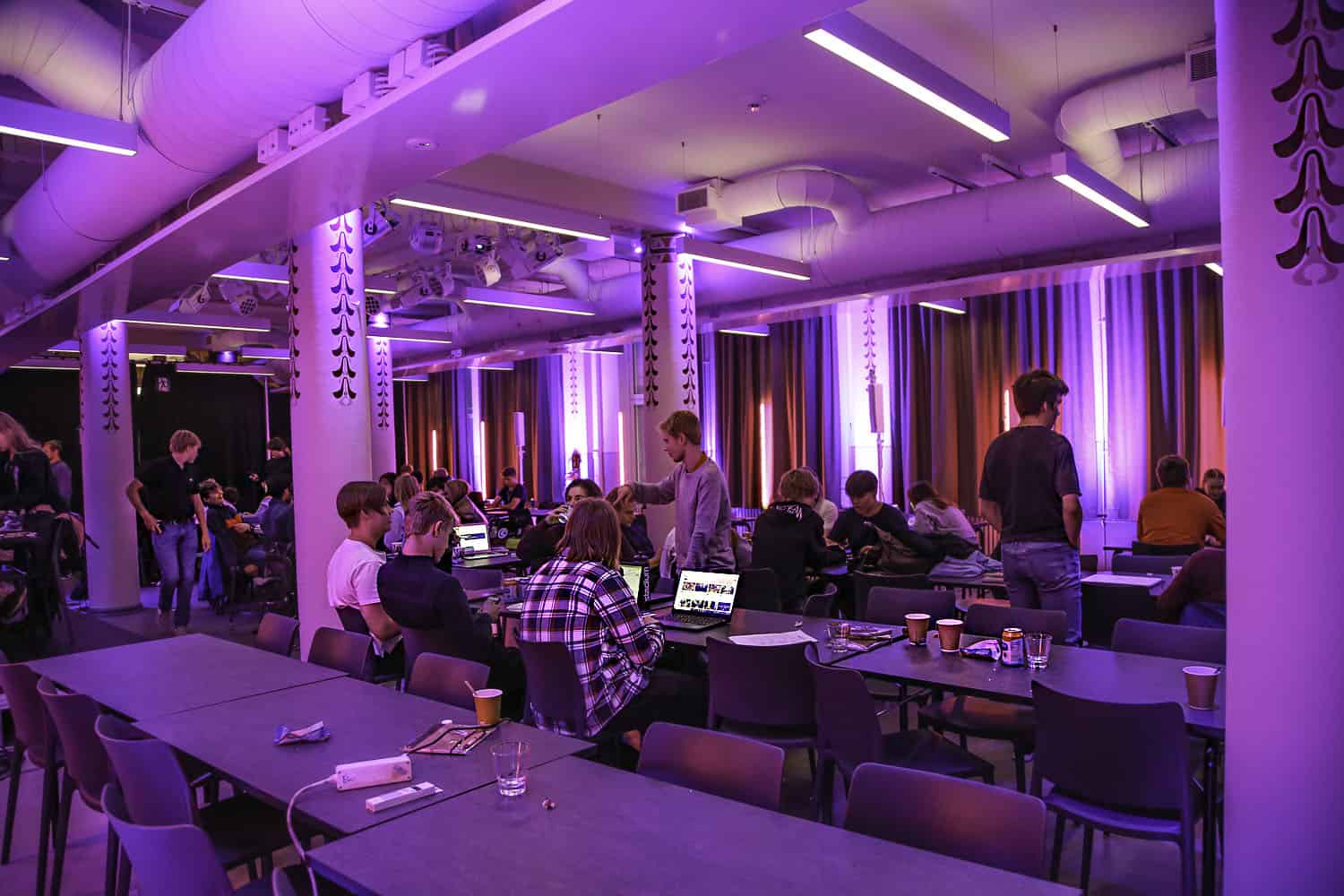 What kinds of innovations are created when 90 participants are tasked with a challenge and two days to find a solution? High school students in the Helsinki region were in a tight spot when they participated in Nexus Hackathon organised by Junction. The City of Helsinki was one of the partners of the event.

Junction, which is known for its tech events, organised the  Nexus Hackathon on 12–13 September where high school students were given challenges from Rovio, Vattenfall and MinnaLearn. The City of Helsinki’s Enterprise Services were involved in sparring with young people. Junction has organised hackathons before, but this is the first time an innovation competition was arranged for high school students.

“We have visited various high schools to introduce the idea of a hackathon because we think that it is a great way to develop creative problem solving skills and to network with others”, Junction’s CFO Kalle Koivu states.

The Nexus Hackathon took place on the Helsinki start up campus Maria 01 where sixteen teams of 3-5 people worked on 12-13 September. The challenges were set by Rovio, Vattenfall and MinnaLearn whose representatives were present to guide the participants. The teams could choose which challenge to attempt.

Themes of sustainability were prominent in the hackathon challenges. Vattenfall hoped for suggestions on ways to reach young people in questions of energy.

Angry Birds mobile game creator Rovio’s challenge was related to minimising energy consumption: According to Head of Communications Lotta Backlund, the teams had to create an entertaining game around the theme of saving electricity or energy. The game could be a board or card game, for instance.

“This is a typical way to learn game development: First, you start with a simple board game idea before you start coding.”

Backlund says that hackathons teach skills which are required in today’s working life. A degree in higher education alone is not enough and not even essential in some industries.

“All of us have to be prepared to adapt to change and develop ourselves, come up with ideas and learn new things all the time. Hackathons foster skills such as these.” 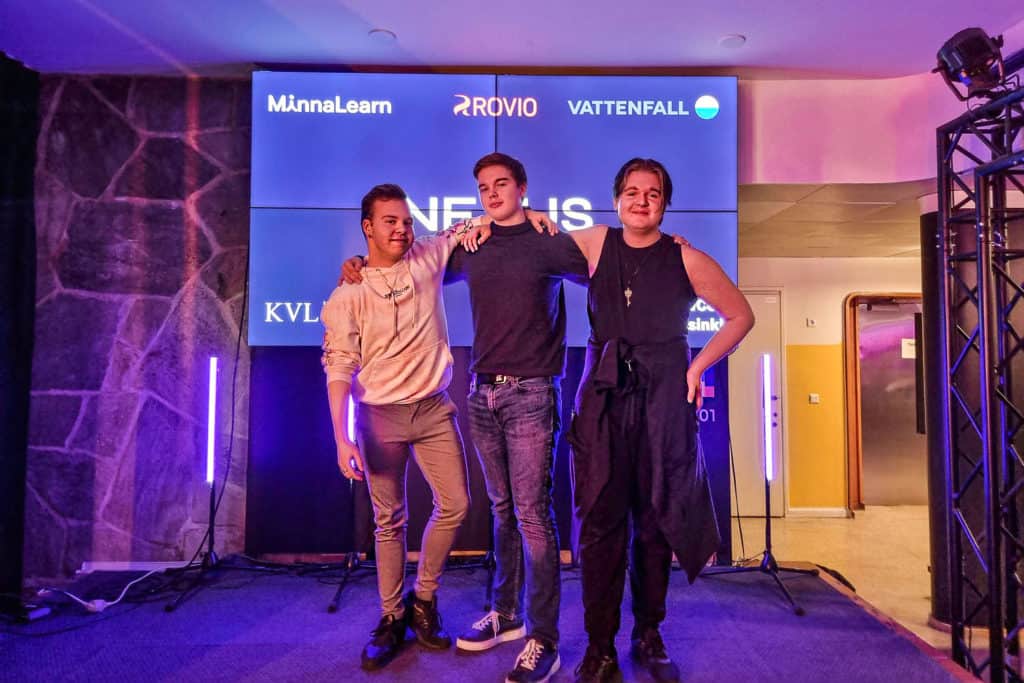 According to research, an increasing number of young people see social media as a place that creates feelings of anxiety and inadequacy. MinnaLearn challenged the hackathon participants to solve this problem.

Niklas Frilund, Tom Autio and Ville Simonen rose to victory at the Nexus Hackathon with their innovation called C.O.P.E. The team’s idea was to create a mobile application which works contrary to platforms such as Facebook, Instagram and TikTok.

“C.O.P.E is not based on addictive algorithms but rather aims to make the users’ lives less stressful, promote a more realistic view of life and remind them to take breaks from social media”, Ville Simonen describes.

The team, from the high school of Etelä-Tapiola, won the vote by an overwhelming majority. The team won a grand prize of €1,000.

“Feels awesome. Although we also had some difficulties, the idea for the mobile application itself came pretty quickly.” Simonen estimates.

The creative solutions of the teams also took MinnaLearn by surprise.

“This has been an incredible event. The Nexus Hackathon challenges would have been difficult even for those who have been in the industry for a long time but the young people approached them with an open mind. The teams have used different tools creatively and even approached problems with curiosity and tackled them head on.” Head of Learning Groups Sampo Leino praises.

Helsinki is the best place for startup companies

The City of Helsinki was one of the partners of the Nexus Hackathon event. The city’s Startup Business Advisor Touko Kontro educated the participants on how to build a growth company.

‘For startup companies, the most important thing is to find problems and then come up with solutions utilising technology. You must have patience when building the product and finding a target audience which is willing to pay for it.”

According to Kontro, there are a lot of misunderstandings related to startup companies and all the hype generated by glorious success stories makes it easy to forget how much work is required to build a profitable and growing business.

He regards Finland and Helsinki as the perfect place for setting up a growth company. Events, such as hackathons, Assembly, Slush and Ropecon, have facilitated useful networking in the technology industry. Helsinki’s Maria 01 is about to become the largest startup campus in Europe.

“We have a brilliant startup ecosystem and loads of mentors and coaches. Peer support and networking play a big role,” Kontro reminds.

The growth services team of Helsinki’s Enterprise Services helps startup teams at different stages to network and form financial connections. NewCo Accelerator provides long-term support and one-to-one coaching by an experienced accelerator team. There is a service package tailored for foreign entrepreneurs which makes entering the Finnish market even easier.

“We have already coached thousands of growth companies at the City of Helsinki since 1993,” Touko Kontro says.

This summer, 45 adolescents interested in entrepreneurship got to test their business idea in Helsinki summer entrepreneurship programmes. The participants reported having gained much-needed experience, particularly in sales, marketing and customer service. Young...

During September, NewCo Helsinki will move to new office premises in Kamppi at Kansakoulukatu 3, 00100 Helsinki. We serve customers who have made an appointment at the current Ensi linja 1 premises until August 31, 2022. During the move in the first weeks of...

Urban Tech Helsinki is a business incubator that supports innovative and growth-oriented companies that focus on solving the challenges of modern cities. The main objective of the incubator is to seek clean and sustainable urban solutions. Operations focus in...